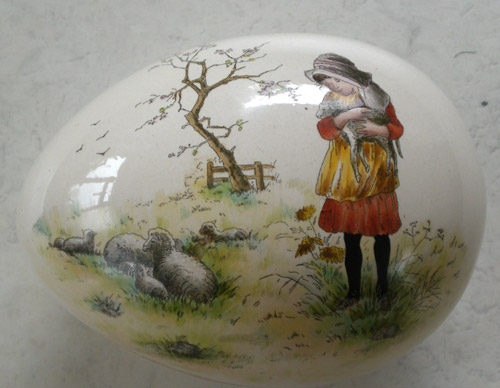 I have inherited this Bonbonière in the shape of an Easter egg from my mother, she from an old uncle, to whom it was passed down by his mother. I always loved this egg shaped dish and could almost smell the wonderful chocolates that once must have been in there. Who was this bought for, by whom, where and when? My mother’s uncle grew up in Düsseldorf in Germany, so I assume the Easter egg is German, but it could be French as the Rhineland was under French occupation for a long time and I once restored a French powder bowl with similar transfer decoration. I imagine my Bonbonière is at least 100 years old but, so far, have not been able to find out more about its origin nor about similar objects. 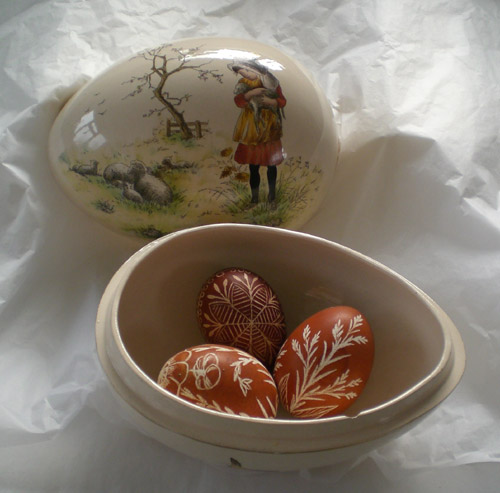 These are, in my opinion, some of the most iconic architectural structures in England, alongside  with the oast houses of Kent and Sussex. 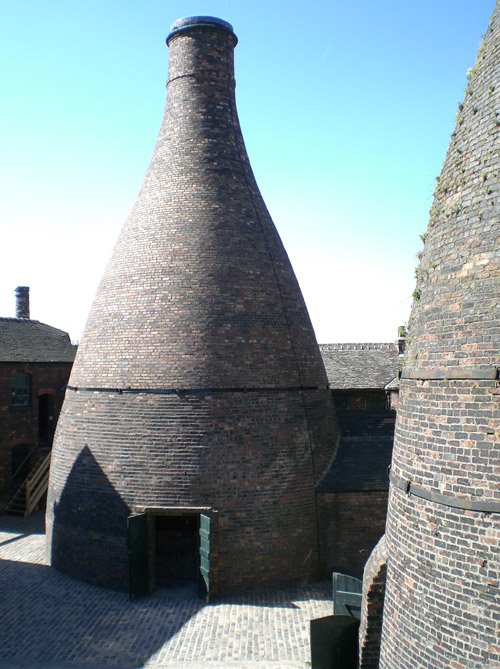 The first ones were built in the 18th century, and at one point there were around 4000 in Stoke-on-Trent, the centre of the ceramic trade in Staffordshire. In the 1950’s there were still around 2000 standing and now there are only 47 left. Visiting Stoke-on-Trent in 2007 I thought it looked deserted and characterless, and  when I  saw old photographs with hundreds of kilns towering above the town, I thought it was a great pity that most of these wonderful chimneys had been pulled down. But a woman who had grown up in Stoke pointed out to me that most residents did not feel very nostalgic about their loss because they were reminders of a time of terrible poverty and dreadful pollution.

The clean air act of 1956 lead to the closing down of many traditional potteries in Staffordshire. Incidentally, the Chancellor has exempted British ceramic industries from the Climate Change Levy (CCL) in his latest budget after much pressure from the local MP and industry leaders. It can only be hoped that this will help to keep companies like Dudson and Emma Bridgewater to  cope with competition from abroad.

A visit to Stoke-on-Trent and the various pottery museums there is certainly a very worth while journey. At the Gladstone Pottery museum one can find out how bottle kilns and the firing process worked. The Dudson factory still produces table ware (fired with gas or electricity) and they have placed an exhibition of antique pieces inside a converted bottle kiln.

It appears that conical kilns do not only exist in Staffordshire: 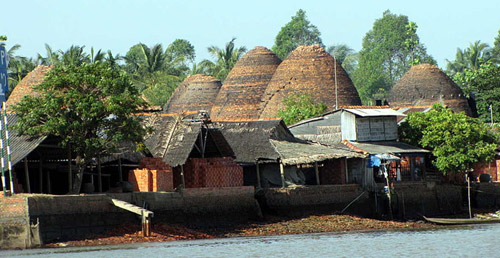 Brick and roof tile making kilns on a branch of the Mekong in the Delta region of Vietnam. Photograph by Bill Bradley 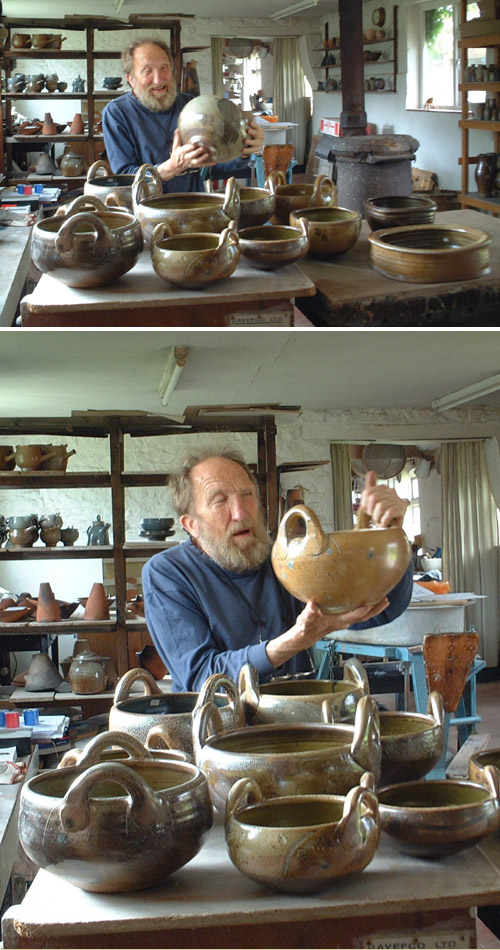 Mick Casson in his workshop at Wobage Farm. Photographs by Clair Hodgson

I have enjoyed studio pottery for a very long time and it is one of the most satisfying areas of my work as a ceramic conservator. When I moved to Herefordshire it was such a pleasure to find that Wobage Farm Workshops are just a stone’s throw away from Pithouse Farm.

The workshops were established by the late Michael Casson and have several resident potters and a gallery attached to the ceramic workshops where pottery courses are regularly held. Michael was an extraordinarily warm and welcoming advocate for studio pottery and has led many to adopt his colleagiate style of working and sharing knowledge.

Johanna has repaired several pots for me which have been made by contemporary ceramicists. One was Raku fired with very delicate glazes (Gabrielle Koch), and another in complex and intense mixed lustrous glazes (Sutton Taylor) the rim of which which had been badly smashed. Her work is absolutely invisible.  After her repair, one would not know the pot had ever been damaged.   What more can one say? Perfection!

I just wanted to write and thank you so very much for putting back together my precious and priceless hand!! You have done such a wonderful job and I intend to say as much to DHL. I was utterly mortified when I heard it had been smashed. So I am immensely grateful to have back my restored hand that will always remind me of such a very special lady!! Thank you again for restoring my hand  – and my broken heart!!

Beautifully done, I am so thrilled and service was both friendly and incredibly professional.  Thank you, it was worth every penny.